Skip to main content Skip to navigation
Posted by Blythe Howell | May 16, 2022

For information about the WSU Breeding Program contact Arron Carter via email at ahcarter@wsu.edu. 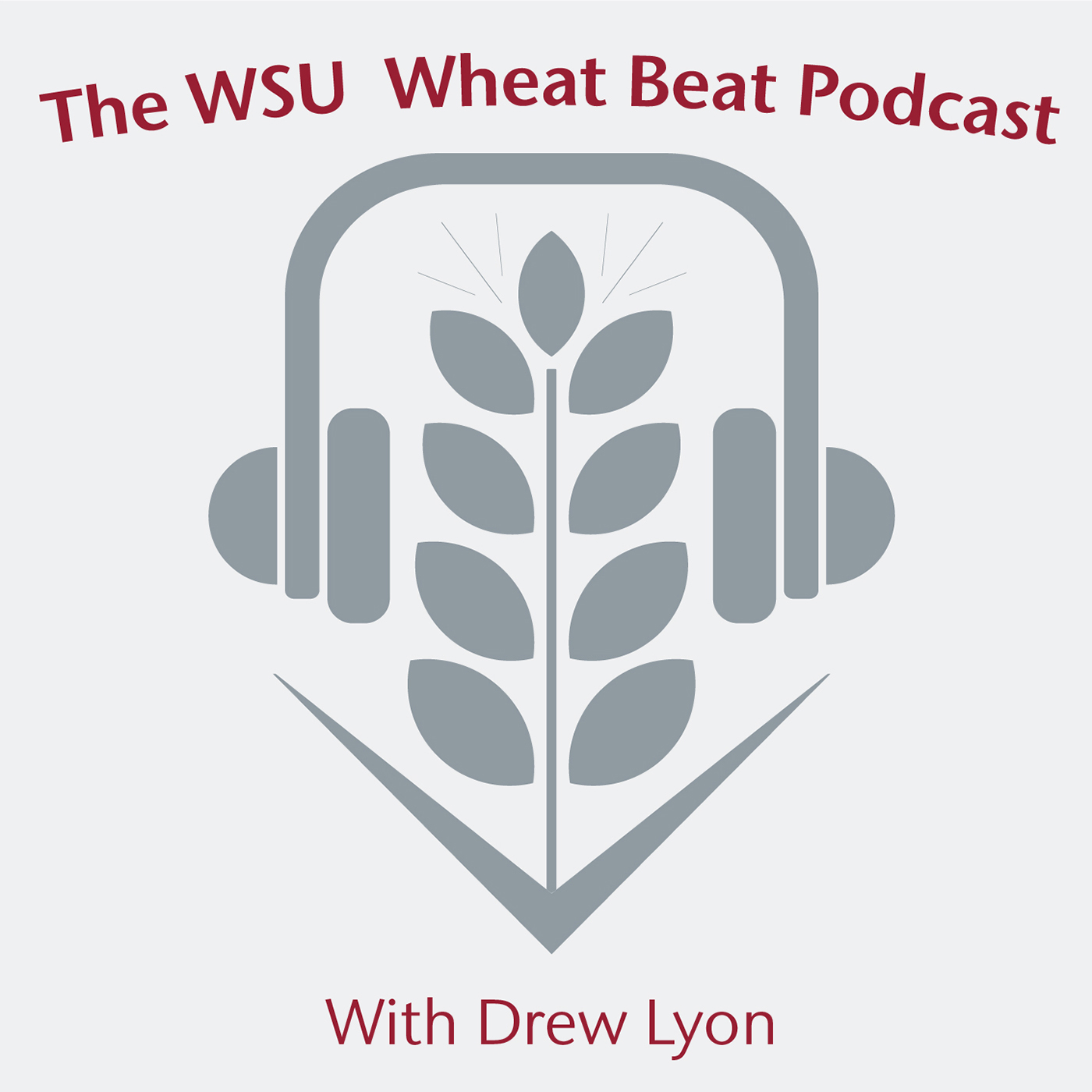 Listed above are some of the most used podcast hosts. iTunes and the iTunes Podcast app are preinstalled on your iPhone and are the simplest tools to use. You simply search for “WSU Wheat Beat Podcast” in the search bar, hit “subscribe” and the download arrow, and listen whenever it’s convenient for you.

After you download an episode, you can listen without using data any time of day. Our goal is to post a new podcast every other Monday. Your podcast app should automatically load our new episodes and download them for you (on WiFi), hands-free if you choose that in the app settings.

Drew Lyon: Hello. Welcome to the WSU Wheat Beat podcast. I’m your host, Drew Lyon, and I want to thank you for joining me as we explore the world of small grains production and research at Washington State University. In each episode, I speak with researchers from WSU and the USDA-ARS to provide you with insights into the latest research on wheat and barley production. If you enjoy the WSU Wheat Beat podcast, do us a favor and subscribe on iTunes or your favorite podcast app and leave us a review so others can find the show too.

Drew Lyon: My guest today is Savannah Phipps. Savannah is a Washington native, growing up an hour south of Seattle in the small town of DuPont. She went on to receive her bachelor’s degree in Plant Science at Montana State University before returning to Washington to become a master’s student in the Crop and Soil Sciences Department here at WSU. Savannah has been studying genetics for snow mold tolerance in a winter wheat land race known as PI 173438 for the WSU Winter Wheat Breeding Program under the supervision of Dr. Arron Carter. Hello, Savannah.

Drew Lyon: So, for our listeners who might not be familiar with snow mold, can you tell us a little bit about snow mold and how it affects wheat?

Savannah Phipps: Yeah, sure. So “snow mold” is a pretty generic term. It describes a bunch of diseases that occur over the globe, and they’re caused by a variety of fungi and fungal like organisms, and they tend to proliferate under the cover of snow, hence the name. You know, we biologists are very creative. And these snow molds, particularly in Washington for the cereals, they tend to attack the leaves and the roots of our plants. And if they get bad enough, they’ll infect their crowns and ultimately cause the entire plant to die. So it can be pretty severe for some of the growers in our state.

Drew Lyon: Particularly, I assume the ones further north where we tend to have a fair bit of snow like what Douglas County and Adams maybe.

Savannah Phipps: Right. Yeah. Douglas County in particular tends to be chronically affected by snow mold and in certain areas of Okanogan County as well.

Drew Lyon: Okay. So why are you studying snow mold tolerance genetics in this PI 173438 specifically?

Savannah Phipps: Yeah. In the early days of studying for snow mold tolerance, they decided to look at a variety of land races from across the globe, from the USDA World Cereal Collection. And of the 10,000 plants that they initially assessed in the 60s about 15 of them actually had any normal tolerance. And of those 15, PI 173438 was one of them. And so in my research, we’re looking at assessing PI 173438 further and hopes that if there were major genes associated, maybe we could incorporate these genes into our varieties moving forward.

Drew Lyon: Yeah, maybe you could explain for our listeners what a land race is versus say a cultivar.

Savannah Phipps: For sure. So land race tends to be a historically adapted variety for a region. They tend to not be actively bred for. So it’s more based around natural selection And these land races we can think of like heirloom tomatoes as a really good analogy in that instance.

Savannah Phipps: So my studies thus far have indicated that PI 173438 has about six genes associated both with snow tolerance and snow mold recovery. So we didn’t find the two or three genes that we thought we might be looking for in this variety since it had such highest snow mold tolerance and with those six genes, you know, we’re hoping maybe moving forward that they can be useful in our program.

Drew Lyon: Okay. So what’s, what’s the next move now that you know about this land race?

Savannah Phipps: I had taken those six genes and developed markers to hopefully assess for them and related populations to see if we could track them. And those efforts proved to be quite challenging since each of those genes ended up having relatively small effects, we weren’t able to track them as well as we had hoped. So using more advanced technologies don’t seem to be as promising at the moment, and it seems we might have to continue using phenotypic selection as we have been using for the last several decades.

Drew Lyon: What does that entail? Phenotypic selection? Is that just going out to the field and seeing what what survives snow mold after a bad winter?

Savannah Phipps: Yeah, it’s basically we go out into the field right after snowmelt and seeing, Oh, that one lives and that one died and obviously with the ones that lives, we want to move them more in our program.

Drew Lyon: Okay. So how important is it to diversify the genetics of our cultivars to snow mold tolerance?

Savannah Phipps: That is an excellent question. With the goal of diversifying your program, it’s something we’d like to do. However, snow mold tolerance is not a gene for gene sort of interaction that we see in stripe rust, where we have one gene that seems to match a certain race. Snow mold generally is a more general pathogen. It affects a variety of other plants aside from cereals. So diversifying is not going to be the end of the world if we can’t do it right away, though, with climate change and other challenges moving forward it’s never it’s never too bad to be too safe, you know?

Drew Lyon: Okay. So I’ve also heard it said that part of the tolerance to snow mold is just a varieties ability to start regrowing in the spring when good conditions come. So that — maybe that’s part of the answer as well. So it may not just be these genes, but varieties that maybe recover from winter injury or being buried under snow for a month and get going fast. Is that possible?

Savannah Phipps: All right. That’s something we’re certainly looking for. And definitely a big factor when we’re making these in-field selections as we definitely want those plants regrow quite quickly. If they don’t regrow quickly, we tend to have a longer season, and that’s not always viable for growers and their growing season because if they grow longer and they’re not going to head, if they’re not heading as quickly as we imagine that they would be heading, then that those off they’re planting times in their harvesting times.

Drew Lyon: Okay. I don’t imagine there’s a lot of places in the country that studies snow mold or have problems with snow mold. Is this kind of a unique problem to Washington or are there other parts of the of the U.S. that that researchers are working on this problem?

Savannah Phipps: For cereals, it’s definitely a major issue in the Pacific Northwest. It’s also problematic for turf grasses. So a lot of the Central and Northeast states do study stonewalled for turf grass management.

Drew Lyon: All right. So you’re wrapping up your master’s program on snow mold. What’s next for you?

Savannah Phipps: I will be moving forward and studying as a doctoral student at Oregon State University. I’ll be in the botany in the plant pathology program there, studying nematology and working with the caneberry breeder there as well.

Drew Lyon: Well, very good luck to you in that pursuit. And thank you for your work on snow mold here at Washington State University.

Drew Lyon: Thanks for joining us and listening to the WSU Wheat Beat podcast. If you like what you hear don’t forget to subscribe and leave a review on iTunes or your favorite podcast app. If you have questions or topics, you’d like to hear on future episodes please email me at drew.lyon — that’s lyon@wsu.edu — (drew.lyon@wsu.edu). You can find us online at smallgrains.wsu.edu and on Facebook and Twitter @WSUSmallGrains. The WSU Wheat Beat podcast is a production of CAHNRS Communications and the College of Agricultural, Human and Natural Resource Sciences at Washington State University. I’m Drew Lyon, we’ll see you next time.

The views, thoughts, and opinions expressed by guests of this podcast are their own and does not imply Washington State University’s endorsement.