Stripe rust occurs worldwide and is probably the most damaging cereal rust compared with leaf rust and stem rust. It is the most commonly occurring cereal rust in the Pacific Northwest U.S. because of the relatively cool conditions during much of the growing season.

Stripe rust is known as yellow rust throughout much of the world, because of the yellow-orange color of the spores, which are in contrast to the red-orange-colored spores of leaf rust and stem rust.

The stripe rust fungus causes damage to the plant by growing in the leaves and producing spores that erupt through the leaf surface. As the fungus grows through the leaf, it reduces the photosynthetic area reducing production of sugars for the plant. Spores erupting through the epidermis of the plant result in greater loss of water. Depending on susceptibility of the variety and amount of disease, yield losses range from minor to complete, with 30% losses common in susceptible varieties.

The presence of elongated lesions bearing yellow-orange spores is most obvious symptom of stripe rust. All growth stages of the plant are susceptible to infection. Initial symptoms of stripe rust appear within 7-10 of infection as small, yellow spots or flecks around infection sites. On susceptible varieties, the spots develop into spore-bearing pustules (sori), that contain masses of yellow-colored urediniospores. Individual pustules are usually scattered on leaves of seedling plants, but occur in elongated stripes on leaves of older plants or in heads. On moderately resistant or resistant plants, the tissue in pustules often turns brown and dies, and fewer spores are produced.

The stripe rust fungus can also produce dark-colored teliospores that are specialized for survival, depending on the race and environmental conditions. Teliospores typically form late in the season when plants begin to senesce or when temperatures begin to cool. 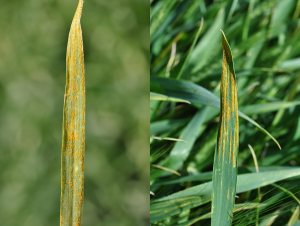 Yellow-orange spores of stripe rust on winter wheat leaves. Pustules are typically long and narrow, which differs from the scattered, individual pustules of leaf rust and stem rust.

Stripe rust is caused by the fungus Puccinia striiformis. Different specialized forms, forma speciales (abbreviated f. sp.) of this fungus occur, with f. sp. tritici causing disease mainly on wheat, some other grasses, and rarely on barley. In contrast, Puccinia striiformis f. sp. hordei causes disease mainly on barley and only a few varieties of wheat. It’s not possible to determine which forma speciales is infecting a plant by looking at it, and the disease cycle and management is the same.

Like other rust fungi, the stripe rust fungus is further specialized into races, each of which is capable of infecting some but not all wheat varieties, depending upon which resistance genes the variety contains. Races form in response to the deployment of new varieties with new combinations of resistance genes, and is a natural process that makes breeding for resistance an ongoing challenge.

Although P. striiformis is able to infect common barberry (Berberis or Mahonia) like the stem rust fungus, there is no evidence to indicate that this is important in the PNW. Rather, the stripe rust fungus survives the winter between crops inside living wheat plants. The most important source of inoculum is from fall-sown plants infected during the fall by urediniospores from the previous crop. Mycelia and urediniospores of the stripe rust fungus are able to survive to -5°C in infected leaves. The greatest survival occurs in areas with mild winter weather such as along the Columbia River and the Willamette Valley. Growth and sporulation of the stripe rust fungus resumes when temperatures warm and wheat plants resume growth.

Urediniospores are wind-dispersed over long distances and spread to adjacent wheat-producing areas and infect the developing crop in the spring. Temperatures from 50 to 64°F with 6 hours of dew are optimal for infection and disease development. Under these conditions, a new generation of pustules and spores can appear every 10-14 days. Temperature is less important for disease development once infection has occurred, but slows with temperatures of 90°F or above and/or shorter dew periods.

The primary method for managing stripe rust is to grow a resistant variety. Two broad types of resistance based on growth stage exist in wheat; all-stage (also known as seedling resistance) and adult-plant resistance (also known as APR). All-stage resistance is present throughout the life of the plant, but is usually only effective against only some races of the pathogen and can become ineffective when races of the pathogen change. With adult-plant resistance, seedling plants are susceptible but become resistant as they age; APR usually appears during the jointing stage. APR may be race-specific, meaning it may become ineffective when races change, or race-non-specific, which remains durable and effective regardless of the stripe rust races that are present. In the PNW, some varieties are described as having high-temperature, adult plant resistance (HTAP), which is a type of APR that requires warming temperatures and older plants, typically jointing or later, before it becomes effective. HTAP is usually considered race non-specific and therefore, durable when races of the pathogen change. The advantage of race-nonspecific resistance is that it is durable when races of the pathogen change, which is a natural and ongoing process in pathogen evolution. Varieties with both all-stage and APR resistance (like found in Madsen) are most desirable because they provide season-long protection and are not as vulnerable to pathogen change as varieties with all-stage resistance only. Stripe rust ratings for PNW varieties are available using the Variety Selection tool under Variety Selection and Testing.

Fungicide seed treatments and foliar fungicide treatments can also be used to manage stripe rust, especially when growing a susceptible or moderately susceptible variety. Fields should be scouted frequently beginning in early spring, depending on the weather, for signs of stripe rust. In addition, Dr. Chen, USDA-ARS, provides regular Stripe Rust Alerts beginning in January each year. If 2 to 5% rust develops on a susceptible variety, fungicide application is warranted. Several products are registered for stripe rust control; be sure to read and follow label directions.

Other control measures for stripe rust include managing volunteer wheat and grassy weeds that could serve as a source of overwintering survival for the stripe rust fungus. Avoid very early planting; such plants are more likely to be infected by stripe rust and provide overwintering inoculum. Manage nutrients for the expected yield potential and avoid over fertilization. Lastly, manage irrigation water to minimize the amount of time dew is present on leaves, which is required for infection.