Wheat harvest is underway in Eastern Washington. With cool spring weather and ample spring rainfall, it looks like it will be a bountiful harvest. Understandably, growers will be focused on getting their grain out of the field and into the bin, but this is also a good time to think about weeds – I’m always thinking about weeds.

The Aussies, who have perhaps the biggest issue with herbicide-resistant weeds of any country, identified the harvest operation as an underutilized opportunity for managing weeds. During harvest, weed seeds from plants that have survived earlier herbicide applications, enter the combine with the grain where they get sorted and either enter the bin with the grain or exit the combine in the chaff, which is then spread behind the combine. In effect, the harvest operation is rewarding these herbicide survivors by spreading them throughout the field, field borders, and even into the next fields to be harvested. The Aussies decided it would be a good idea to manage the chaff in such a way as to reduce the amount of weed seed that is added to the soil seed bank. The concept of Harvest Weed Seed Control (HWSC) was born.

The publication Harvest Weed Seed Control: Applications for PNW (Pacific Northwest) Wheat Production Systems (PNW730) discusses the applications of HWSC for PNW wheat production. Unfortunately, many of our most problematic weeds, for example, Italian ryegrass, shed a majority of their seed by harvest time in most years, which makes HWSC less effective than it has proven to be in Australia where 80+ percent of the seed of their most troublesome weed species remains in the head at harvest time. Although less effective here than in Australia, HWSC can still play an important role in an integrated weed management system by reducing the quantity of weed seed that enters the soil seed bank. This is particularly important for managing herbicide-resistant weed seed. When combined with other integrated weed management practices, HWSC can improve overall weed management.

Another benefit of HWSC was brought to my attention by a timothy hay producer in the Columbia Basin. He planted timothy into wheat stubble, and he was interested in HWSC because volunteer wheat was his biggest weed problem in new seedings of timothy. Small wheat grain that falls through the sieves, enters the chaff fraction, and is spread behind the combine. Harvest weed seed control can be used to manage volunteer wheat grain just like any other weed seed in the chaff. That conversation reminded me what a problem volunteer wheat can be for wheat growers. 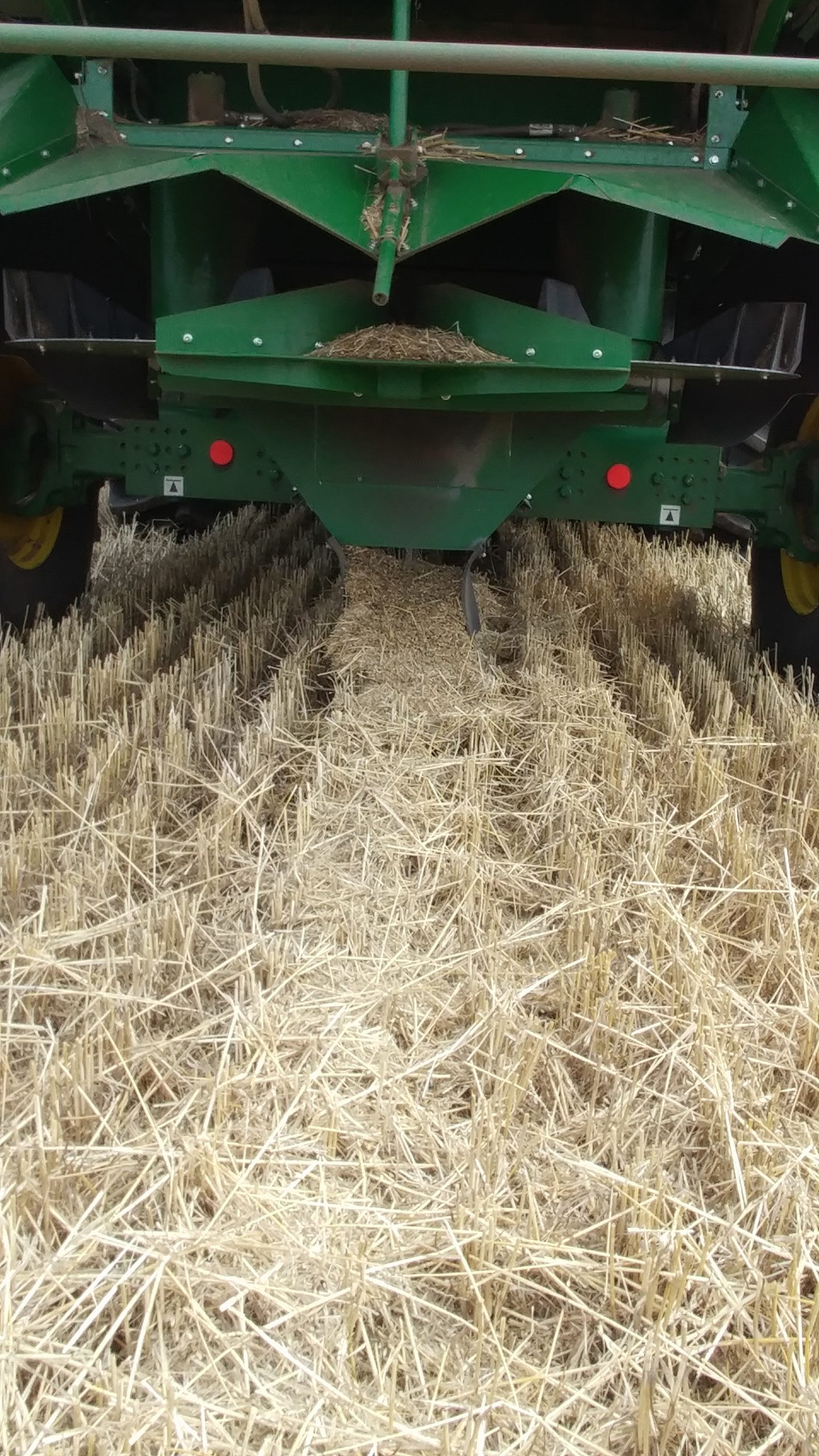 Volunteer wheat is present in every field where wheat is grown. In addition to using valuable soil water, volunteer wheat also serves as a host for root diseases, viruses, and insects that can transmit viral diseases to other plants. This is often referred to as the “Green Bridge”. Rhizoctonia root rot and Pythium root rot are two soilborne fungi that can build-up on roots of volunteer wheat and then infect new seedling roots. Green bridge (volunteer wheat) management is critical for reducing these two root diseases of wheat. Green bridge management is also important for managing wheat streak mosaic virus, which has been increasing in prevalence in Eastern Washington in recent years. It is transmitted by leaf curl mites that survive on volunteer wheat between wheat crops. Reducing the amount of wheat grain that exits the combine and is spread throughout the field would greatly benefit these disease management issues. This benefit alone may make HWSC worth the investment for many wheat growers.

Harvest time is also a good time to make note of portions of the field where weed densities are heavy. After wheat harvest, these areas can be revisited for future management. Weed infestations are often patchy in nature and knowing where the weeds are can improve the efficiency of weed management.

Have a safe and bountiful harvest!