Jointed goatgrass (Aegilops cylindrica) is a winter annual grass native of southern Europe and western Asia. Jointed goatgrass is generally found in areas of 10 to 20 inches of annual rainfall and in elevations of 800 to 4,000 feet. The leaves of jointed goatgrass are up to a ½ inch wide, and have evenly spaced fine hairs along the leaf edges and down the sheath opening. Stems can grow up to 4 feet tall and are tipped with slender, cylindrical spikes that appear to be a series of joints stacked on top of each other. 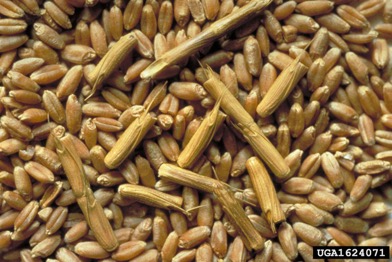 Cultural:  Crop rotation is an effective control method. The use of a broadleaf crop can aid in breaking the cycle of jointed goatgrass infestations in grass-like cropping systems. Mowing can be effective in roadsides, fencerows and non-cropland areas; however, timing is critical. Burning can reduce seed by 80% if sufficient residue is present; however, seeds buried in the soil will remain viable. Moldboard plowing can be used to bury seedlings at least 6 inches; however, seeds brought up through plowing will cause additional populations to develop.

Biological Control: There are no biological control measures available for jointed goatgrass.

To prevent resistance and manage goatgrass populations, use herbicide with a different mode of action on a rotational basis and implement alternative crop rotations.