Characteristics
Horseweed, Conyza Canadensis (L.) Cronq., is a winter or summer annual, native to North America. The plant grows upright, tall and narrow, and is unbranched at the base unless damaged. Horseweed can reach heights exceeding 6 feet.

Leaves are alternate, dark green, crowded on the stem, hairy, and lanceolate. Leaves grow progressively smaller up the stem. A dense inflorescence is borne at the end of branched stems, with small white ray and yellowish disk florets. The leaves and flowers contain a terpene, which may cause skin and mucosal irritation in humans and animals and may inhibit grazing. 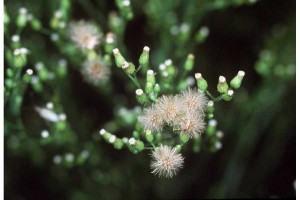 Impact
Horseweed is a strong competitor for water and grows rapidly. It is a common weed of fields and meadows and prefers disturbed open places, such as roadsides, construction sites, pastures, empty lots, and other waste areas. It has become problematic and difficult to control in glyphosate-resistant crop production systems, especially in the eastern United States. Horseweed is often susceptible to common tillage practices of conventional-tillage cropping systems; conversely, it can thrive in minimum or no-tillage systems.

Mechanical: Mowing infested areas when the plants are in the bud stage will prevent seed production, but will not control horseweed. Tillage effectively deters the weed.

Relying strictly on post-emergence products can make horseweed very problematic, so effective soil-residual herbicides may need to be considered.

Controlling horseweed in the seedling or rosette stag is the most effective, since small plants are easily controlled and residual herbicides applied at these stages can provide control through early June. Emerged plant should be controlled by 2, 4-D ester.

Biological: No known biological control agents exist. Livestock do not graze horseweed and grazing may cause irritation.