Strawbreaker foot rot, which is also called eyespot, is a common and serious disease of winter wheat throughout most of eastern Washington, eastern Oregon, northern Idaho, and other areas of the Pacific Northwest, especially higher rainfall, wheat-growing areas.  Yield loss varies considerably depending upon when plants are infected, the percentage of plants infected and susceptibility of the variety, but can range up to 50 percent in commercial fields when disease is severe.

Symptoms of eyespot are usually observed first in early spring shortly after plants break dormancy and begin to grow.  On young plants, symptoms consist of diffuse, elliptical or eye-shaped lesions on leaf sheaths in the crown near the soil surface; lesions frequently occur below the soil surface. One or several lesions can occur on a stem; when several lesions are present, they can coalesce leading to a general discoloration of stems in the crown. As plants grow and lesions develop in the spring, individual lesions are yellow-brown in color and may have dark-colored “scurf” in the center of the lesion. The fungus colonizes successive leaf sheaths and eventually the true stem, destroying structural, water, and food conducting tissues, which weakens the stem resulting in lodging; stems can also die standing resulting in “whiteheads”.  Lodging of stems typically occurs in multiple directions as opposed to one direction, such as occurs after wind or rain, resulting in the condition known as “straggling” and the other common name of “strawbreaker.”   Lodged stems often break off at the soil line when pulled.  Examination of the broken stems reveals a dark brown, charred appearance, again with the presence of “scurf.”  Eyespot only affects stems; roots are not colonized. 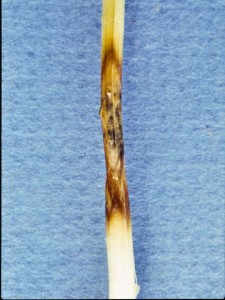 Eyespot is caused by two closely related fungi; Oculimacula yallundae and Oculicmacula acuformis, which were formerly known as the wheat- and rye-types of Pseudocercosporella herpotrichoides, respectively. Although we can distinguish them in the lab by growing them on special media, it’s not possible to determine which one is infecting a plant in the field based on symptoms and control options are the same for both.

The eyespot fungi persist between crops only in the stubble of previously infected plants.  Infection is favored by cool, 45 to 55°F, and moist conditions; therefore this disease is often most serious in the lower areas of a field such as toe-slopes and flats.  When conditions are favorable, these fungi produce literally millions of spores on infested plant debris in soil.  Splashing raindrops spread spores short distances where they land on a plant and germinate.  Upon germination, the fungus infects the outer leaf sheaths and eventually grows into the stem.

During colonization, the fungus forms masses of mycelium (scurf) on the leaf surface and between leaf sheaths giving the lesions a charred appearance.  If infection occurs early in the autumn, extensive colonization of the plant occurs and it is unable to provide the water required to fill the kernels, resulting in shriveled kernels, whiteheads, and lodging.  Less damage occurs when infection takes place in later in spring because the pathogen does not have enough time to colonize the entire stem.

Because these fungi sporulate abundantly and infect most readily in cool wet conditions, eyespot is most severe where fall rains are frequent.  Relative humidity at the soil surface where infection takes place is very important and cultural practices that result in higher humidity around the crowns of plants will increase the severity of eyespot. For example, early seeding results in large plants that shade the soil leading to increased humidity during periods of cool damp weather.  High seeding rates and spring tillage accentuate this effect.  Disturbing the soil in the spring results in soil being pushed around the bases of the plants, thereby creating small moist chambers in which humidity is high and infection and colonization are favored.  Conversely, drying winds may reduce the severity of eyespot by reducing moisture at the soil surface.

Older plants, such as occurs with early seeding, are more susceptible to infection by the fungus than plants from later seeding.  Delaying seeding reduces disease but may result in more severe soil erosion and also increases the probability of winter injury.  Where eyespot is a problem, seeding should be early enough to be consistent with good cultural practices and take advantage of agronomic yield potential determined by local environmental conditions, and spring tillage should be avoided.

Crop rotation is not completely effective in controlling eyespot, but it can reduce the amount of colonized straw (inoculum) present in soil and therefore, it is of value where the disease is severe or in preventing inoculum build-up in fields where it is not damaging. Unfortunately, even a small amount of inoculum can multiply to a point where damage occurs.  Because of this, winter barley is not an effective rotation crop with wheat.  Although barley is less susceptible than wheat, these fungi can develop enough on barley to create a threat to subsequent winter wheat crops.  Spring seeded grains, although susceptible, are not usually affected by eyespot in the PNW and are effective rotation crops, as are peas, lentils, chickpeas, and canola.

Burning wheat stubble is not effective in controlling eyespot, even though the fungus survives on straw in the soil, enough colonized straw is protected by the soil or otherwise escapes destruction to cause subsequent infection. Other residue management techniques including tillage also affect eyespot. In general, reducing tillage reduces the severity of eyespot; this effect results from the later seeding dates that are typical of conservation tillage systems in the Pacific Northwest, and from interference with the splashing of spores due to the presence of standing residue or residue-covered soil surface.

Foliar fungicides may be applied in spring before stem elongation begins to reduce damage caused by eyespot. Before spraying, fields should be scouted to collect enough plants to give 50 stems. Wash the stems and separate them into healthy and diseased piles; when the diseased stems are 5 out of 50, or 10%, that’s the point at which a spray will be justified because there’s probably another 10%, or 20% total, that are infected. Currently, there are four fungicides registered for eyespot control. Check with your local field consultant or extension specialist to decide which fungicide will work best for your situation.