Cephalosporium stripe is a vascular wilt disease of winter wheat and other small grains and grasses that is common throughout eastern Washington, northeastern Oregon, and northern Idaho. Although this disease is more common in the higher rainfall areas, it can occur in the intermediate- and low-rainfall wheat-growing areas too when conditions are favorable. Yield loss can be 100% when disease is severe and a highly susceptible variety is grown; however, yield losses are usually much less under commercial conditions with most commonly grown varieties.

Symptoms of Cephalosporium stripe appear in the spring after winter wheat begins to regrow. Initially, lower leaves may have a mottled appearance or faint yellow stripes. Yellow stripes running from the tip of the leaf blade to its base and down the leaf sheath is characteristic of Cephalosporium stripe. Each leaf may have one to three stripes. As leaves age, fine, brown (necrotic) streaks develop in the center of the stripes and extend down the leaf sheaths. These streaks are the colonized water-conducting tissue (xylem) that becomes plugged with the fungus. During the period of rapid growth in May, symptoms may fade or become less obvious; however, the stripes will eventually appear in the flag leaves. Infected stems are stunted leading to a double-canopy of healthy and infected heads. Severely infected stems die prematurely, resulting in dead, standing stems, or whiteheads. Color of the whiteheads is usually dull and not typical of healthy, bright-colored straw.

Stripe rust may be confused with Cephalosporium stripe; however, the stripes are shorter and do not extend the length of the leaf blade and down the leaf sheath. Stripe rust lesions usually have powdery, yellow-orange-colored spores on the leaf that can be wiped-off with a finger. 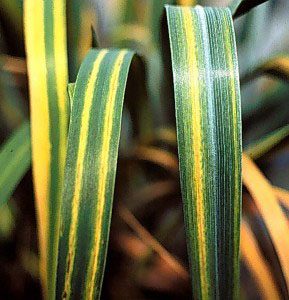 Yellow (chlorotic) stripes in leaves of winter wheat are characteristic of Cephalosporium stripe. A single leaf may have one to three stripes. Initially, stripes are yellow but develop brown (necrotic) stripes and stripes with age. Note very small necrotic streaks in the stripes on these leaves. Stripes resulting from Cephalosporium stripe characteristically extend down the leaf blade and the leaf sheath.
Photo credit: Tim Murray

The disease cycle of Cephalosporium stripe is very similar to eyespot. C. gramineum, the causal fungus, persists between crops only in the stubble of previously infected plants. Infection is favored by cool, 45 to 55°F, and moist conditions; therefore this disease is often most serious in the lower areas of a field such as toe-slopes and flats.  When conditions are favorable, C. gramineum produces millions of spores on infested plant debris in soil that are washed into the top layers of soil around the crown of nearby plants. Spores germinate of the surface of roots and in the crown, and enter the plant directly or through breaks in the surface. Once inside the plant, the fungus grows into the xylem, where is produces more spores that spread throughout the plant.

The influence of weather conditions after infection on subsequent disease development are not well understood. However, disease is more severe when winter is open and plants are subjected to repeated soil freezing and thawing. Because C. gramineum sporulates abundantly and infects most readily in cool wet conditions, Cephalosporium stripe is most severe where fall rains are frequent. Rainfall in spring likely doesn’t effect disease directly, but water stress in late spring and early summer increases yield loss.

Early seeding, relative to the production area, favors Cephalosporium stripe, especially on summer fallow. Early seeding results in large plants that have larger root systems and more places for the pathogen to infect. Any factor that promotes rapid growth in the fall will probably increase the occurrence of Cephalosporium stripe. Delaying seeding by even 10 days can significantly reduce disease.

Longer breaks between susceptible crops reduces Cephalosporium stripe because there is more time for colonized straw to decompose, thus reducing the amount of inoculum in the soil. Because the fungus survives only on straw colonized while the plant is alive, the pathogen dies when the host straw decomposes. To be effective, the rotation should allow 2 years out of winter wheat. Rotation crops include spring wheat and barley, peas, lentils, or fallow. Although spring wheat and barley are susceptible, they are not infected because environmental conditions do not favor infection. Many grassy weeds are hosts for C. gramineum and should be controlled during the rotation.

Soil pH has a pronounced effect on survival of the pathogen and on disease development. Soils having a pH of less than 5.5 favor disease development, fungus survival, and spore production. Experiments have shown that under the same weather, seeding date and inoculum conditions, more Cephalosporium stripe develops when soil pH is less than 6.0. C. gramineum produces the most spores when the pH ranges from 3.9 to 5.5. Liming to raise soil pH is effective in controlling Cephalosporium stripe, especially when pH is less than 5.5.

Reducing tillage slows decomposition of infested straw and prolongs survival of the pathogen. Studies show that straw infested with C. gramineum survives longer under no-till than under minimum till or conventional moldboard plowing. However, other factors such as generally later seeding dates in reduced till systems seem to offset increased pathogen survival such that Cephalosporium stripe is not worse under no-till.