Historically, stem rust of wheat and barley has been one of the most important diseases human civilization has confronted.

This disease occurs worldwide and is probably most important on wheat. In the United States, stem rust has been most important in the Midwest and Great Plains states. Stem rust has occurred sporadically in the Pacific Northwest USA over the past 60 years, but weather patterns since 2007 have been more conducive to its appearance in eastern Washington, northern Idaho, and western Oregon. Unlike most diseases, stem rust requires two plants to complete the entire cycle. The common barberry (Berberis vulgaris) is the alternate host to the stem rust fungus, and is crucial to the pathogen completing its life cycle. Note that common barberry is a different species than the Japanese baberry (Berberis thunbergii), which is a common, decorative landscape plant in the U.S. Damage to the host plant results from destruction of photosynthetic leaf area, as well as an increase in evaporative water loss due to breakage of the epidermis and cuticle of the plant.

This website is an educational tool produced by the scientists working on this problem.

The stem rust fungus produces several different structures during its life cycle. The most obvious of these on wheat are the reddish-colored urediniospores that form on leaves, stems, and heads during the growing season. These spores are spread by wind and infect wheat or barley plants. The black-colored teliospores are produced toward the end of the growing season and are structures specialized for survival. These spores enable the fungus to survive on straw over winter and only spread with the straw. On barberry, orange- to salmon-colored aecia are produced on the lower leaf surfaces early in the spring. Aeciospores are produced in the aecia and are spread to wheat by wind.

When stem rust is severe, lodging of infected plants may occur, but disease is seldom that severe in the PNW. 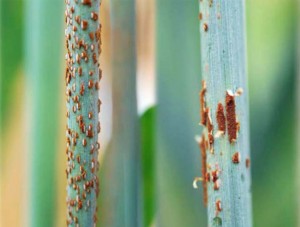 Reddish-colored urediniospores of stem rust on a wheat stem. Note the light-colored flaking around the pustules, which is characteristic of stem rust. The urediniospores are spread by wind from one wheat plant to another. Photo credit: Erick de Wolf, Kansas State University.

Stem rust of wheat and barley is caused by the fungus Puccinia graminis f. sp. tritici. Other specialized forms (f. sp.) of the stem rust fungus occur that infect other grasses; for example, Puccinia graminis f. sp. secalis infects rye.  In addition to these specialized forms, specialized races of the fungus exist that infect some wheat varieties but not others. Whether a particular variety is infected or not depends on the disease resistance genes it contains. This is the very same situation that occurs with the stripe rust fungus.

Puccinia graminis f. sp. tritici is a heteroecious rust requiring both wheat and barberry (Berberis or Mahonia) to complete its life cycle.  In the U.S. PNW, P. graminis survives over winter as teliospores in previously infected crop residue.  Teliospores germinate in the spring by producing basidiospores that are wind-disseminated to barberry. Basidiospores infect barberry leaves and form structures called spermogonia on the upper leaf surface.  Spermogonia are the structures in which sexual reproduction occurs and are not clearly visible to the naked eye.

Aecia form in close proximity to the spermogonia and usually on the lower leaf surface or developing fruit. Aeciospores are wind disseminated to wheat where they penetrate through stomata and form uredinia.  Urediniospores formed on wheat are wind-disseminated and act as secondary inoculum by infecting other wheat plants.  Teliospores form in the uredinium (now a telium) as the host senesces or as night temperatures become cooler in the autumn.  Teliospores are not disseminated but remain in host residue.

Stem rust is controlled primarily with disease-resistant cultivars.  Tremendous genetic variability in this fungus and the large number of pathogenic races has made control difficult.  Eradication of barberry has been used to control stem rust in the U.S. since 1917 when the barberry eradication program. The Barberry Eradication program ended in 1982, and barberries have been making a comeback in the PNW.

Foliar fungicides are also used to control stem rust. Several different products with varying modes of action are registered for control. Check with your local field consultant or extension specialist to decide which fungicide will work best for your situation.

The Pacific Northwest Barberry Working Group was formed in 2011 to address issues surrounding barberry and stem rust in the PNW. The group consists of Land-Grant University scientists, extension specialists, and state and federal scientists and plant protection professionals. We conduct research and education activities and engage stakeholders to address the threat barberry and stem rust pose to wheat and barley production in the PNW and U.S.