Skip to main content Skip to navigation
Posted by Joel Felix, Oregon State University | November 16, 2021
We are going to discuss herbicide resistance in weeds yet again, but with a slight twist!

Have you wondered what would be the combined effects of hot, dry weather conditions and herbicide-resistant weeds on crop yields? So, let us start by reviewing the available weed herbicide resistance information. But first a brief sidebar.

Pest resistance to pesticides dates back to the early 1900s. The first reported insects resistant to insecticides was in 1908; the first report of plant pathogens resistant to fungicides was in 1940, and the first reported case of weeds resistant to herbicides was 2,4-D in 1957. As of November 12, 2021, the International Herbicide-Resistant Database listed 509 unique cases (species x site of action) of herbicide-resistant weeds globally, with 266 species (153 broadleaf and 113 grasses). The United States leads all countries for the number of weed species identified as resistant to herbicides [Figure 1]. Wheat and corn top the list of crops affected with the most unique herbicide resistant weed cases in the world [Figure 2]. Closer to home, the first cases of herbicide-resistant weeds in the Pacific Northwest were reported in 1987. The first cases in 1987 included Italian ryegrass (Lolium perenne ssp multiflorum) in Oregon found to be resistant to Hoelon™ (diclofop) herbicide in wheat. In the same year, prickly lettuce (Lactuca seriolla) resistant to Glean™ (chlorsulfuron) herbicide was identified in Idaho roadsides, wheat, lentils, canola, peas, and chickpeas; and Russian thistle (Salsola tragus) resistant to Glean™ herbicide in wheat in Washington. In 2014, kochia (Bassia scoparia) resistant to glyphosate herbicide was identified in sugar beet and corn fields in Oregon and Idaho. 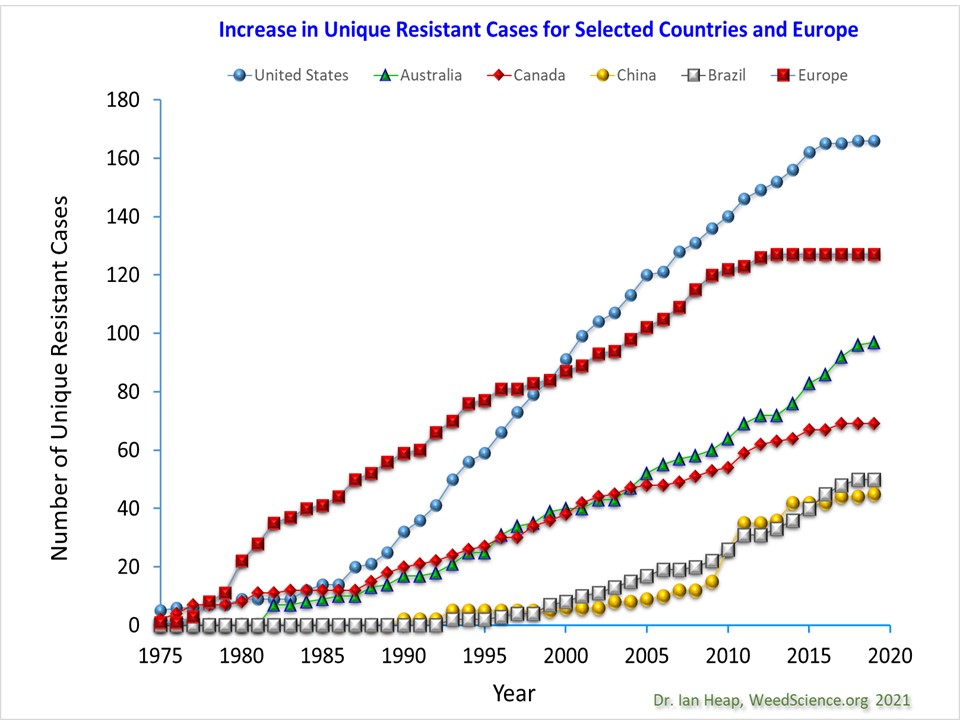 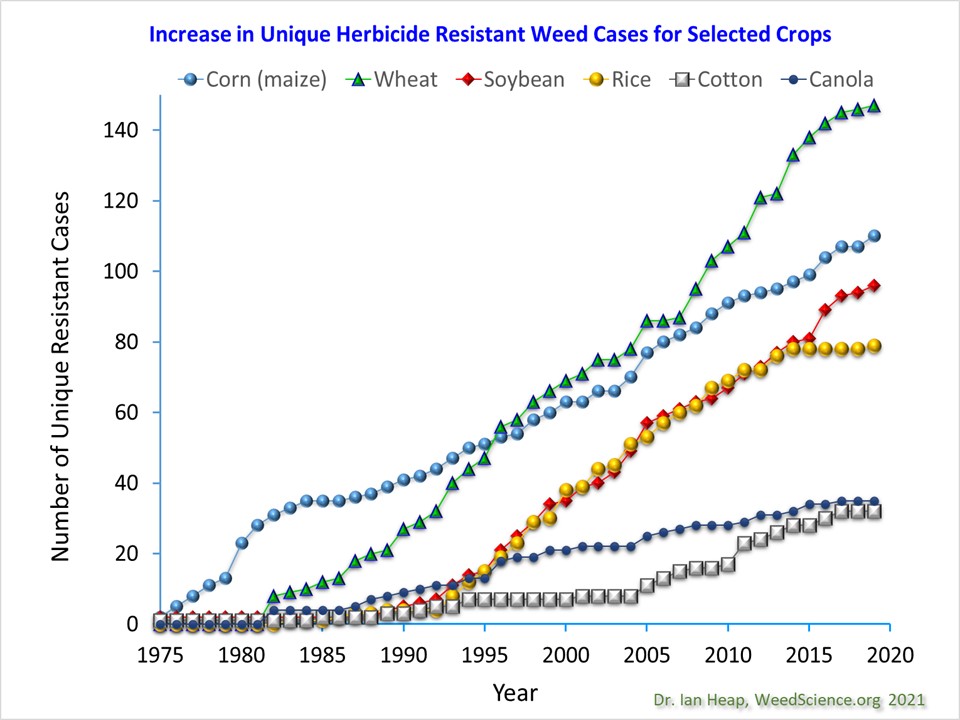 Figure 2. Increase in unique herbicide resistant weed cases for selected crops (Figure courtest of Dr. Ian Heap weedscience.org 2021
As for the weather, undoubtedly in the recent past it has been unpredictable and trending towards the warm end of the spectrum. The summer of 2020 [Figure 3 and could link to my previous blog on this topic] was hotter compared to previous years. As we know, herbicide weed efficacy suffers under hot, dry conditions. Thus, most of our focus has been largely on the effects of poor weed control (brought about by herbicide resistance) on crop yields. However, the question is what would be the combined effects of warm/hot drier weather conditions and poor weed control due to herbicide resistance on crop yields?
(select photo to enlarge) 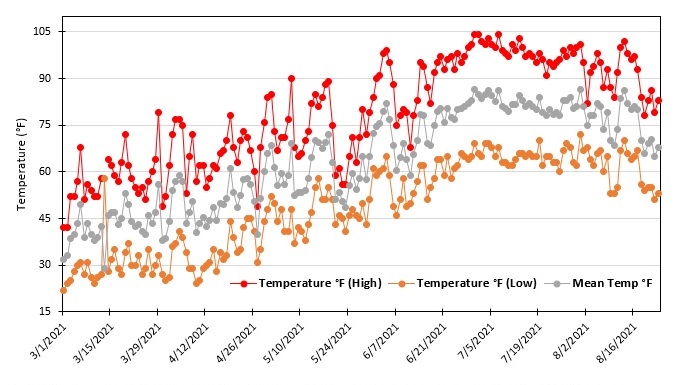 Figure 3. Air temperature from March to August 2021 at the Malheur Experiment Station, Ontario, OR (note the daytime high temperature (red line) from May to early August, 2021). (Figure courtesy of Joel Felix, Oregon State University)
With that question in mind, three researchers at University of Illinois- Christopher Landau, Aaron Hager, and Martin Williams II, set to explore the combined effects of weather conditions and the level of weed control on corn yield. The results are published in a paper titled “Diminishing weed control exacerbates maize yield loss to adverse weather”. Employing the power of machine learning and data mining techniques they modeled an expansive database of herbicide efficacy trials across 205 weather conditions in Illinois and 27 years. Machine-learning algorithms helped the researchers make sense of the large, complex dataset. They looked at crop management considerations, including planting date, hybrid choice, and planting density; percent weed control for multiple weed species; weather data at key growth stages throughout the corn life cycle; and yield. The results indicated that late-season control of all weed species was the most important predictor of corn yield loss due to weeds. Treatments with poor late season weed control of <12% resulted in the highest average corn yield loss of 50%. The lowest average yield loss was 3% in treatments with the late season weed control assessed as high as ≥94%.

These are interesting results because for a late planted crop such as corn, one would expect herbicide sprays and mechanical activities to prepare the field would destroy early weed cohorts and reduce overall competition with the crop. However, various weeds tend to germinate and emerge throughout summer. Additionally, hot and dry weather conditions tend to reduce the efficacy of post emergence herbicides. So, poor weed control coupled with resistant species could quickly result in overall poor weed control and reduce crop yields. Also, the combined effects of weed/crop competition and adverse conditions during the corn flowering and grain filling stages would tend to affect further the realized yield.

So, as more and more weeds develop herbicide resistance and weather conditions trend towards hot and dry summers, there is a need to rethink weed control practices in various crops. Diversifying weed control to include seed destruction and other techniques could reduce the overall soil weed seedbank and minimize emergence throughout the summer season.

The paper by Christopher Landau, Aaron Hager and Martin Williams II titled “Diminishing weed control exacerbates maize yield loss to adverse weather” is available online as an open access and it was used as a reference to prepare this blog.