On April 21, 2022, I wrote an article for this blog titled ‘Watch out for Palmer amaranth in the Pacific Northwest’ based on anecdotal evidence centered on a photograph taken in Weiser, ID. Then on July 7, 2022, Dr. Albert Adjesiwor, University of Idaho weed scientist based at Kimberly Experiment and Extension Center in Twin Falls, ID confirmed the existence of Waterhemp (another dreaded pigweed) in the Upper Treasure Valley region of Idaho in an article titled ‘Waterhemp Is Here, Is Palmer amaranth next?’. Since then, we have been on the lookout for direct evidence to ascertain that indeed Palmer amaranth may have entered the Pacific Northwestern region of the United States. Then on August 4, 2022, I received a photograph from an individual near Marsing, ID concerned about a ‘strange’ looking pigweed. The following day I paid them a visit and determined that all of the visual evidence pointed to Palmer amaranth. I quickly sent photographs to colleagues in the Midwestern states (who have been battling the weed for a while now) and they confirmed my suspicion that it was indeed Palmer amaranth. Leaf samples have been submitted to the University of Colorado for DNA confirmation testing.

So, with that in mind, we decided to circle back to the blog article on April 21, 2022 and give the reader more information on how to correctly identify Palmer amaranth. Why now, you ask? Because pigweeds right now are at their prime blooming stage when it is relatively easy to differentiate between members of the pigweed family.

Why should you worry about the Palmer amaranth sighting at this site? This could turn out to be a single incident in a single field, but I doubt that is the case. The field in Marsing ID has been in spring wheat the past 3 years and has been harvested by the same contract-harvester! There is little doubt the contractor harvested other fields in the area and likely moved Palmer amaranth seeds elsewhere. Time will tell. But in the meantime, let’s educate ourselves on how to correctly identify this weed. Because the first step towards containing a pest, in this case a weed called Palmer amaranth, is to correctly identify it.

Pigweeds are native to North and Central America, but crop production and commerce has helped pigweeds to spread to other parts of the world. The use of Amaranth as green vegetables, grain crops, and free sharing/purchase of seeds has helped the spread around the world. Amaranths tolerate shade, drought, hot weather, and use the most efficient form of photosynthesis. Pigweed plants are easily recognized by many people in most settings, but their correct identification can be tricky. Be warned that even though we encounter a number of pigweeds (Amaranth spp) in the Pacific Northwest (PNW) Region, it’s not the purpose of this article to list them all. However, there are some members of the Amaranth species that are most often encountered in the region in various settings. Prostrate pigweed (Amaranthus blitoides) and tumble pigweed (Amaranthus albus) are presented in Figure 1. These two will mainly be encountered in gardens, roadside, and waste areas. 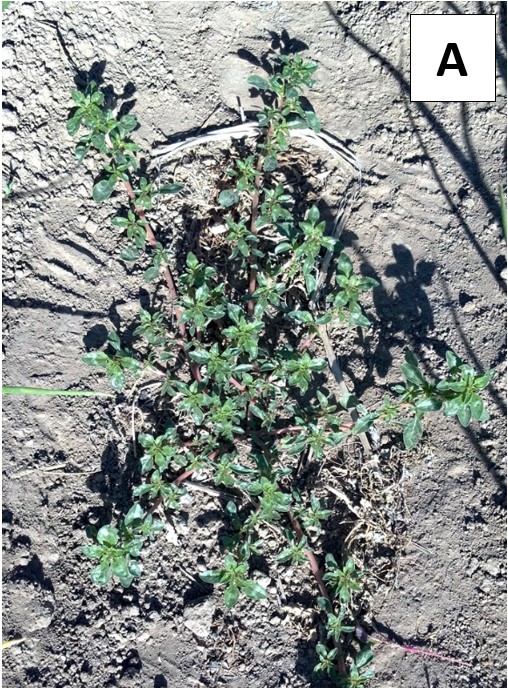 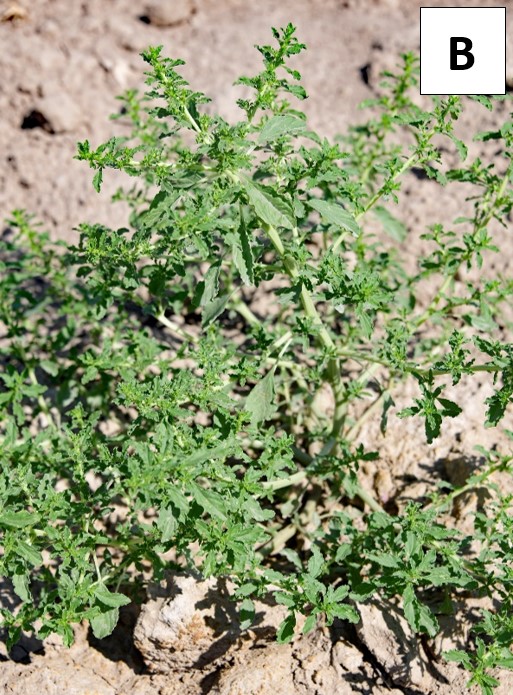 Figure 1. Prostrate pigweed (Amaranthus blitoides) (A) is an annual found in the northern two thirds of the United States, and it has a prostrate growth habit. Leaves are alternate, shiny, dark-green, oval, and spoon shaped with a prominent white midrib. A common weed of gardens, roadside, and waste areas. Tumble pigweed (Amaranthus albus) (B) grows in a bushy-branched, rounded or globular habit. Mature plants have pale green to whitish and smooth leaves. Leaves are elliptic to oblong with wavy margins. Plants tend to snap at the ground and tumble in the wind (like kochia and Russian thistle).

Redroot pigweed (Amaranthus retroflexus) and Powell amaranth (Amaranthus powellii) are presented in Figure 2 and are a staple in most field crops in the region. 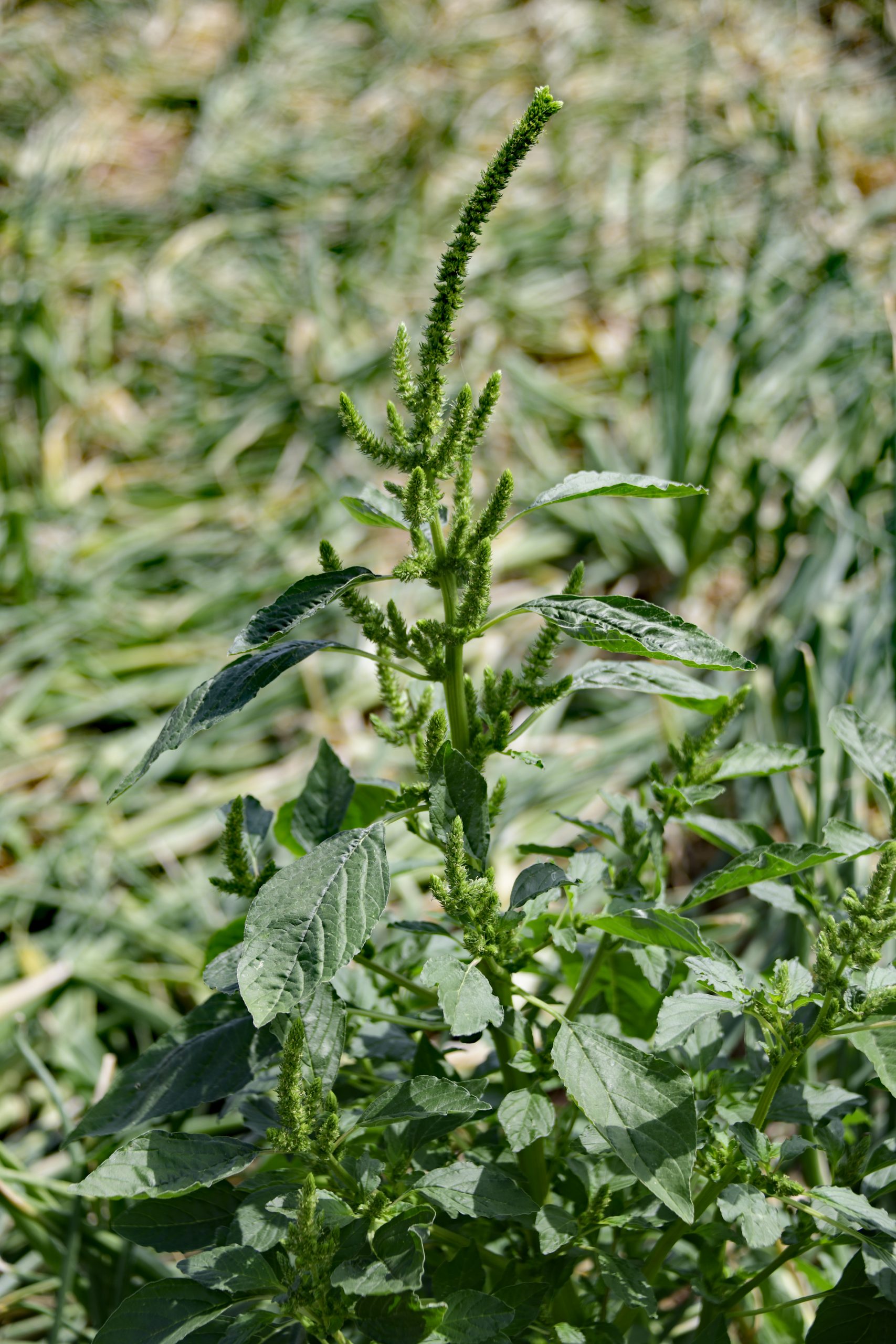 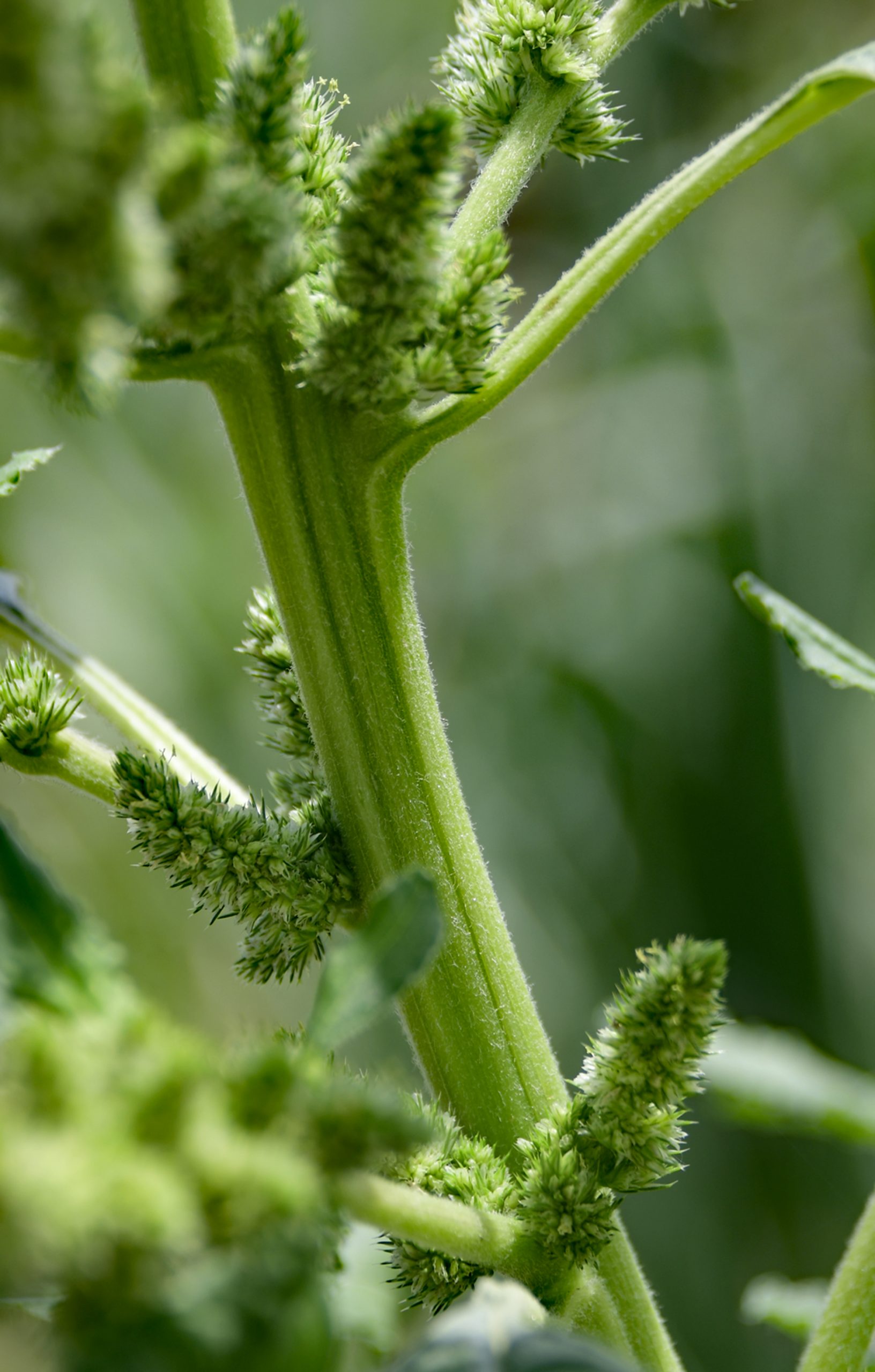 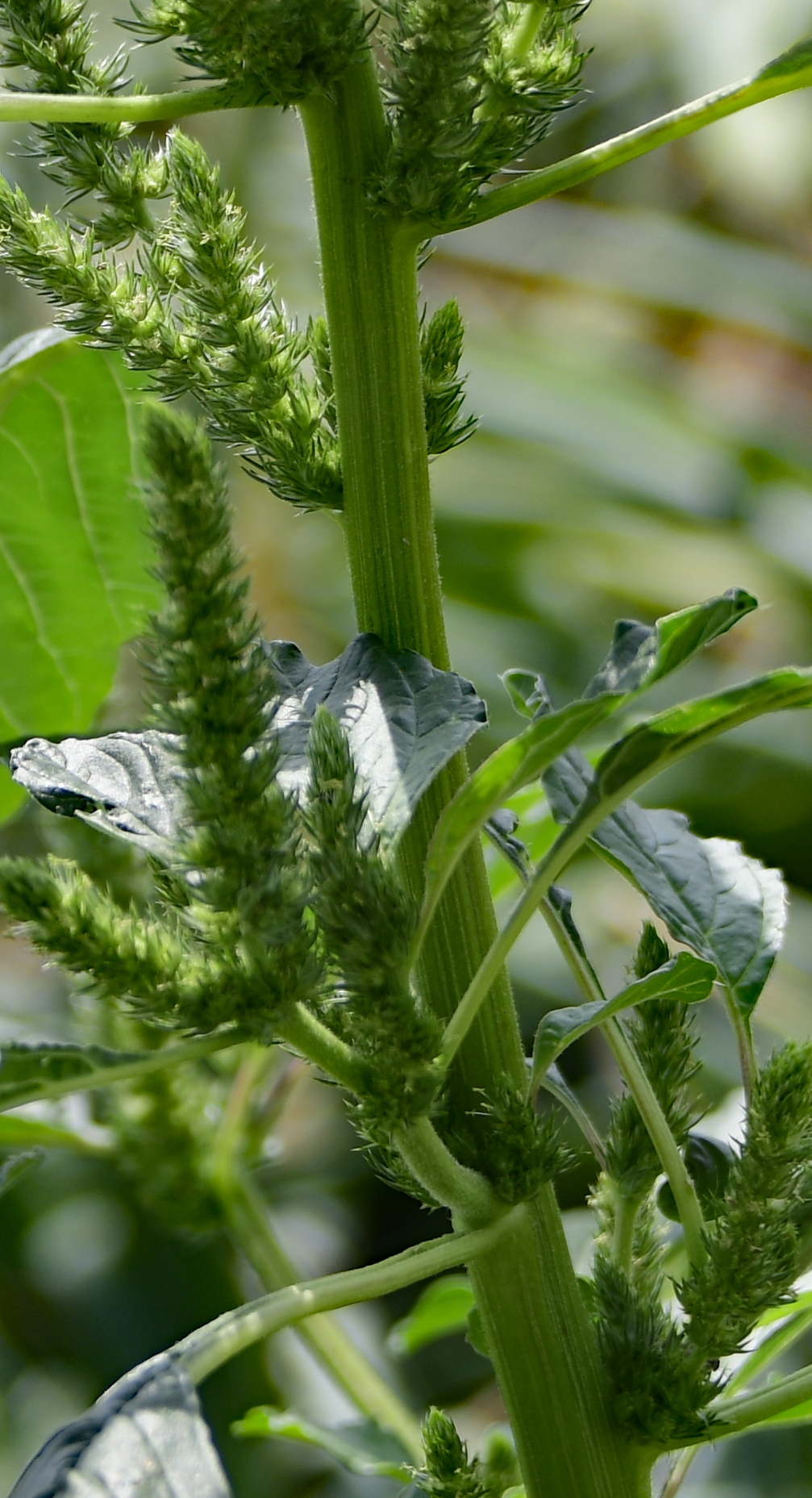 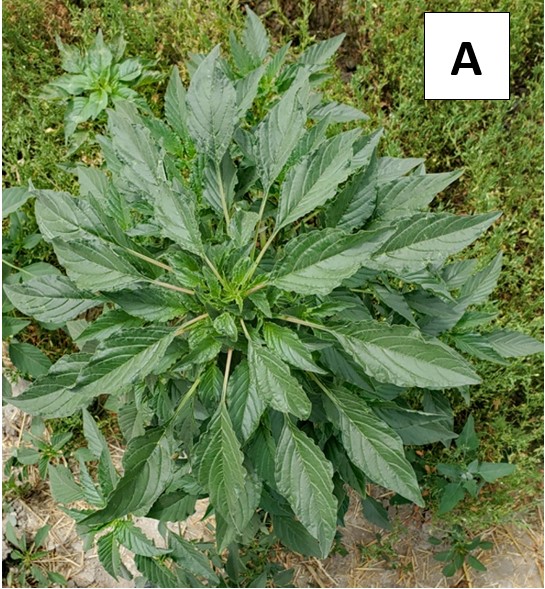 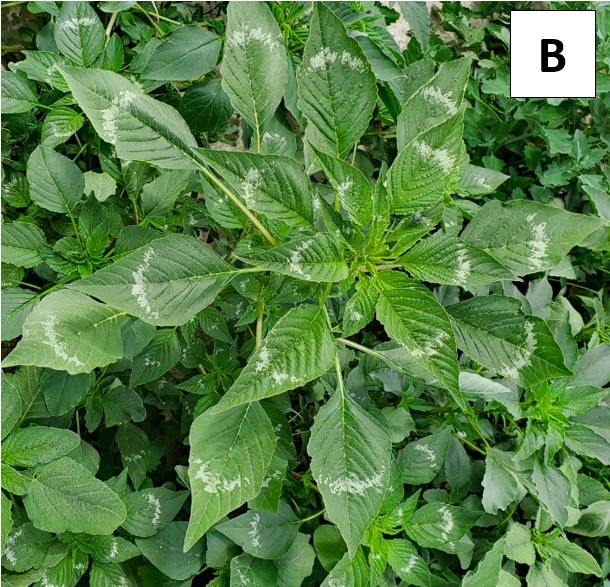 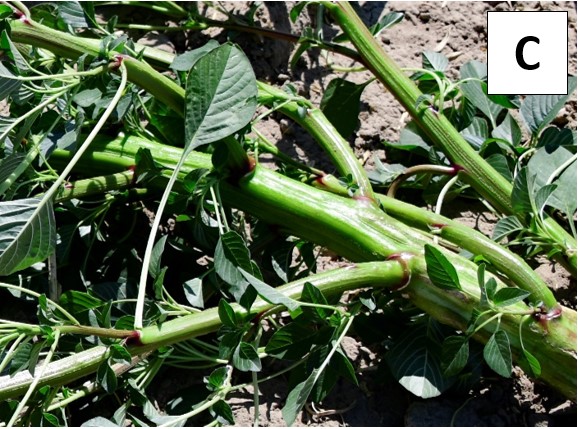 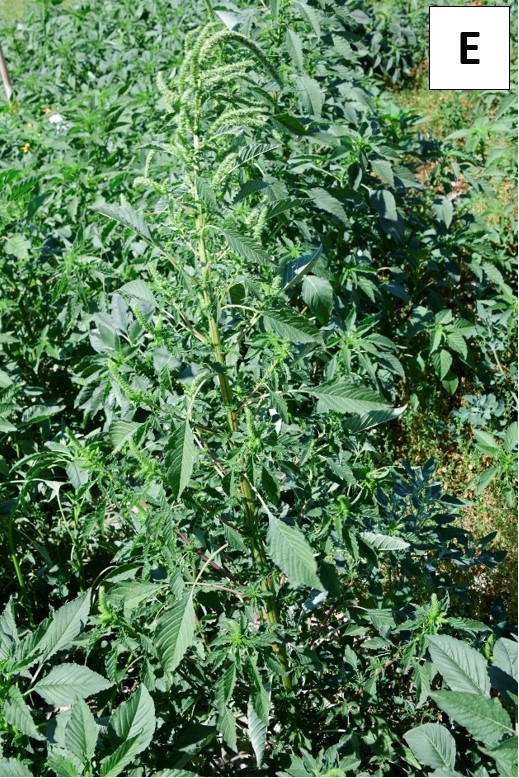 Figure 3. There are unique distinguishing characteristics to correctly identify Palmer amaranth; when viewed from the top, seedlings have a much denser canopy with packed leaves (A); leaves on some Palmer amaranth plants will exhibit a white or purple imprint – chevron shaped watermark (B); stems are hairless and could have purple coloration (C); a much more unique characteristic is longer petiole (slender part connecting the leaf to the stem) – that is longer than the leaf lamina – particularly on older leaves (D); Palmer amaranth (Amaranthus palmeri) is an erect pigweed species capable of growing to heights greater than 6 or 8 ft (even with crop competition). Flowers are borne on long and thin drooping terminal flower spike (could be 2-3 ft) and often branched for those borne in the leaf axial (E). Unlike the other pigweeds mentioned here, Palmer amaranth flowers are produced on separate plants i.e. there are male and female plants (dioecious).