Skip to main content Skip to navigation
Posted by Joel Felix | August 26, 2021
After I thought long and hard about what to write about this week, I settled on the 2021 cropping season in the Treasure Valley of Eastern Oregon and Southwestern Idaho. The 2021 growing season was tough on many fronts. The weather was atrocious (Figure 1). Human labor availability was extremely scarce! 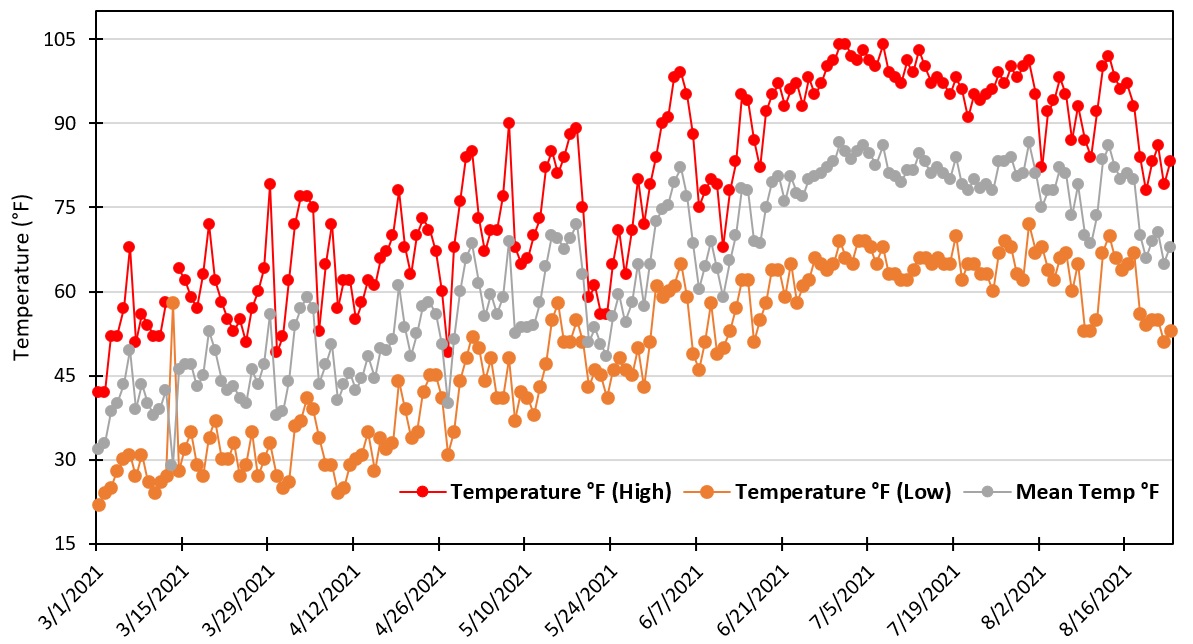 Figure 1. Air temperature from March to August 2021 at the Malheur Experiment Station, Ontario, OR (note the daytime high temperature (red line) between mid-June to early August, 2021).
The Valley experienced a dry winter 2020 followed by a dry spring 2021. If you are not familiar with the Treasure Valley, think of an area where crop production is entirely dependent on irrigation. The land is prepared during the previous fall, ending with mound beds to capture the moisture received from winter snow and spring precipitation. Beds are then harrowed during spring (March for onion and sugar beet and May for dry bean) enabling seeding in moist soil conditions. Normally there is enough soil moisture for seed germination and emergence until irrigation water is available about mid-April. Moist soil conditions also allow soil-applied herbicide activation, which helps to control early weed cohorts. Spring 2021 was dry resulting in early season watering to allow seed germination. Just for comparison, the precipitation from January to April 30 was 3.41” in 2018, 7.56” in 2019, 3.2” in 2020, compared to 2.64” in 2021.
Early-season weed control in onion appeared to be satisfactory. But as the air temperature ramped up and growers responded by frequent irrigation, we noticed heavy battalions of weeds, particularly kochia, dominate onion fields. It is likely soil-applied herbicides were watered down below the soil profile, which enabled weed seeds to germinate unimpeded. However, herbicides sprayed post-emergence [bromoxynil (Brox 2EC) and oxyfluorfen (GoalTender)] and mid-season hand-weeding should have controlled most weeds in onion fields. Low availability of labor during June and July resulted in fields being overtaken by weeds or partially weeded late (Figure 2). Likely growers will experience variable onion size, which will result in reduced overall yields.

Figure 2. A partially late weeded onion field near Nyssa, OR due to shortage of labor during summer 2021. Weed presence at harvest present challenges including clogging harvest equipment resulting in reduction of harvest efficiency.
Surprisingly, kochia was also evident in dry bean fields (Figure 3). Given that dry beans are seeded late (May to early June), early kochia cohorts should have been destroyed by mechanical action during bed harrowing. Additionally, given that pre-emergence herbicides used in dry beans including ethalfluralin (Sonalan HFP), pendimethalin (Prowl 3.3EC or Prowl H2O), and trifluralin (Treflan HFP) provide ‘good-excellent’ control of kochia, one wonders whether extreme weather conditions may have affected herbicide performance. Glyphosate-resistant kochia could be seen in many sugar beets (Figure 4).

Figure 3. A kochia trail in a dry bean field in the Oregon Slope area near Ontario, OR during summer 2021. 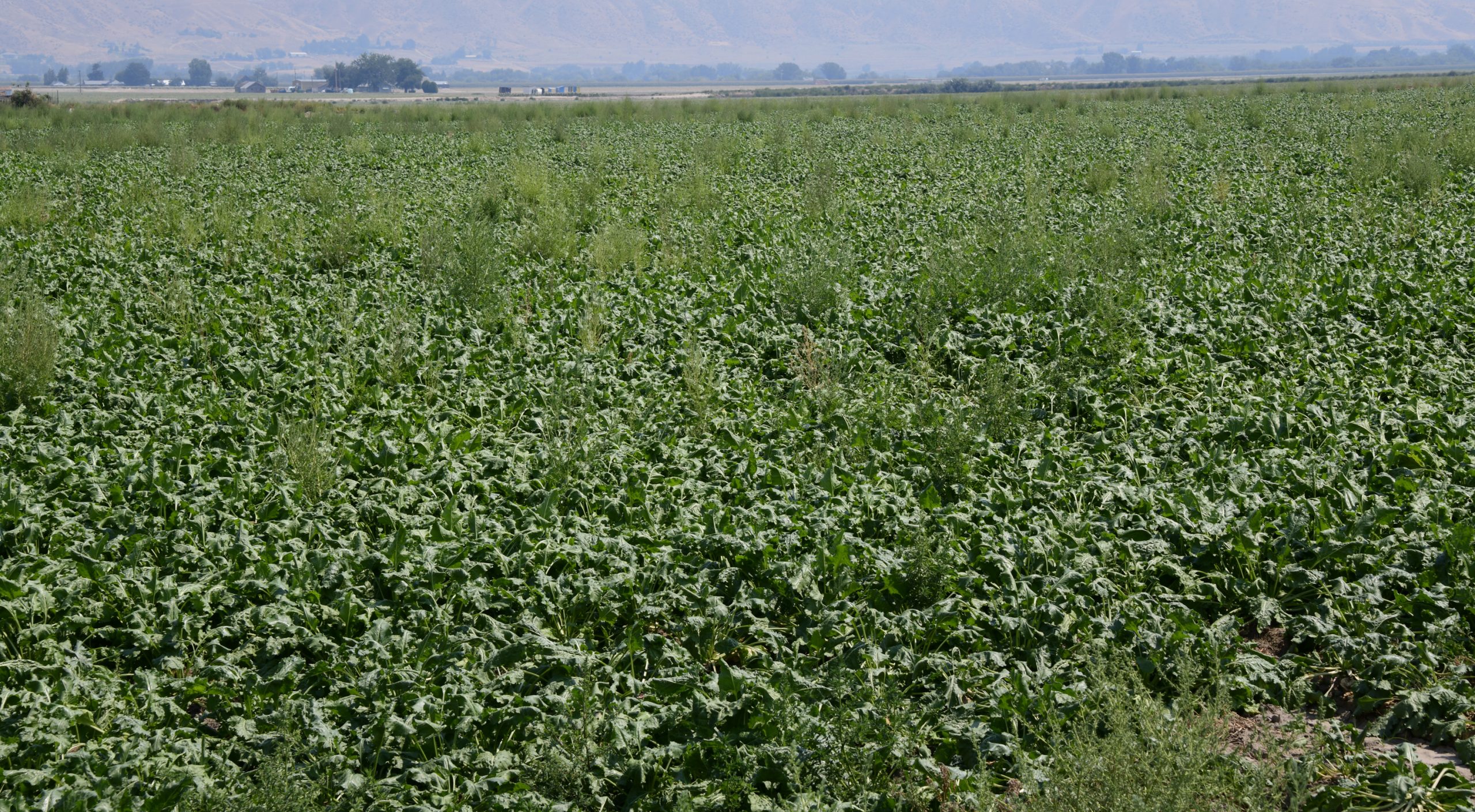 Figure 4. Glyphosate-resistant kochia in a sugar beet field in the Oregon Slope area near Ontario, OR during summer 2021. The flailing action to remove sugar beet tops before harvest results in wide dispersion of kochia seeds in the field and may impact the next crop grown in rotation.
Indications of labor shortage in the Valley were evident during early spring 2021 when a local commercial asparagus farm could not find enough hands at harvest. Instead of letting asparagus go to waste, the farm owner responded by inviting the general public to pick asparagus for personal use – as much as one could pick! The incident was chronicled in a story by the Seattle Times reporter in this article, “‘Like science fiction,’ Seattle startup sends laser-equipped robots to zap weeds on farmland“. More than 6,000 people, including mothers with their toddlers in tow, showed up over the course of one weekend. However, most of those people had no idea of what to expect and vowed to never step foot on a farm again!

Is this a sign of weather changes going forward? It could be, and if it is, we may likely expect an increase in produce costs in the future. On the weed control front, I wish something useful could be distilled out of kochia! That would surely take a huge bite in the large populations seen in the Treasure Valley!