Skip to main content Skip to navigation
Posted by Joel Felix | April 26, 2021
Records suggest that humans and weeds have coexisted since the beginning of recorded time. As such, challenges to manage weeds have been a long-standing issue for centuries. Weed control prior to the 1940s involved inorganic chemicals (Timmons, 1970), mechanical and cultural methods, and hand-weeding. There was a high demand for labor to manage weeds. The advent of carbon-based pesticides in the 1940s ushered in an era of the wide use of herbicides to manage weeds throughout much of the developed world. The need for hand labor was drastically reduced. Heavy chemical use in agriculture is evidenced by the $12 billion spent by farmers in the United States on pesticides in 2008, with herbicides accounting for 76%, which was a 5-fold increase since 1960 (USDA/ERS, 2014). The introduction of glyphosate-resistant crops starting in the mid-90s further revolutionized weed management in crops, including sugar beet. However, with the benefits of improved weed control, often at low amounts of herbicides/acre, weeds evolved resistance to herbicides that accelerated starting in the late-90s. Currently, according to the International Herbicide-Resistant Weed Database website, 521 unique cases of herbicide resistance in 23 out of 26 known herbicide sites of action and 164 different herbicides have been documented throughout the world (Heap, 2021). Almost all the sugar beets grown in the Pacific Northwest (PNW) are glyphosate-resistant making Roundup® the herbicide of choice to manage weeds since 2008.
Consequently, weeds including kochia (a tumbleweed) have developed glyphosate resistance (Kumar, et al., 2017). While more and more cases of herbicide resistance continue to be identified, there is no matching effort to develop new herbicides that growers depended on for decades to manage weeds. The outlook for product development is not promising given that in the period between 2010 to 2014 only four new herbicides were introduced (Jeschke, 2016).

So, the products that reduced the need for hand labor seven decades ago, have been compromised and now farmers may need hand labor to manage weeds, which is currently scarce. Additionally, there exists an outcry from the public about pesticide use, which is blamed for environmental and groundwater contamination. Consequently, it is imperative for researchers and farmers to rethink the herbicide paradigm. 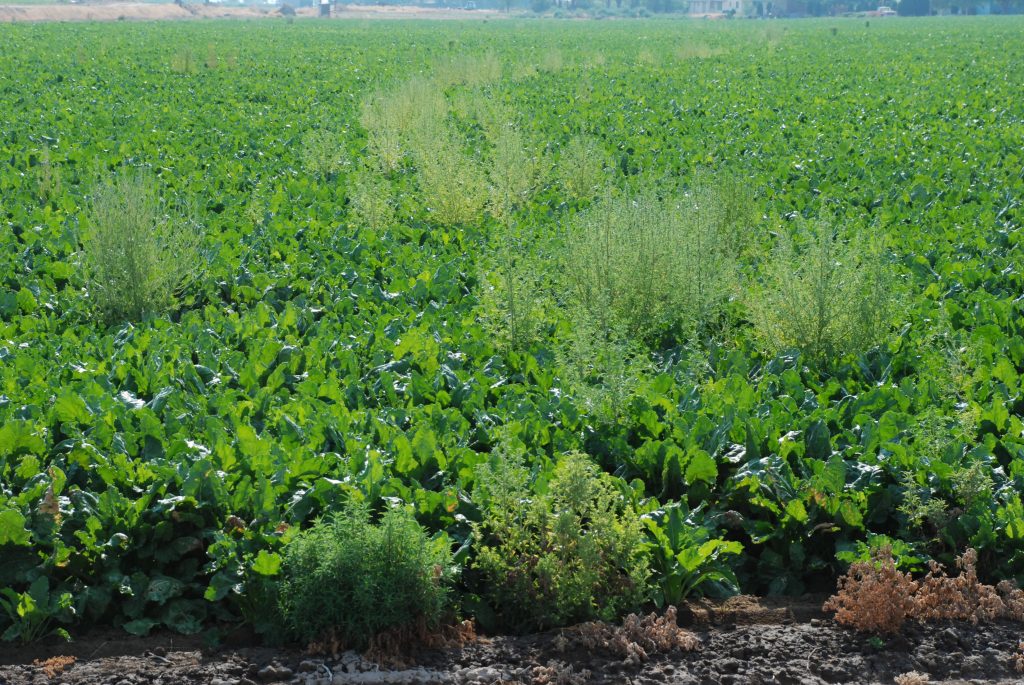 Kochia plants that survived multiple rounds of glyphosate applications near Ontario, Oregon. Photo courtesy of Joel Felix, Oregon State University.
Automated weed removal technology including unmanned vehicles, popularly known as robots, have started to enter agriculture and provide an alternative path to weed control with reduced dependence on both the agricultural chemicals industry and hand weeding. Robots have the potential to improve the weeding efficiency while reducing environmental and economic costs (Fennimore et al. 2016; Xiaolong, et al., 2020). Robotic technologies for weed removal will be much cheaper at $11 to 17 million/unit compared to >250 million to develop a new herbicide (Rṻegg et al. 2007). All robots are designed on the premise of selectively identifying and eliminating weeds while minimizing disturbance to the crop.

Even though unmanned vehicles are developed using different platforms, they have one thing in common; the use of artificial intelligence (AI) to identify crops grown in defined patterns (rows) and weeds therein. My lingering question has been why not use AI to teach robots to only identify a crop and then spray/weed/flame every other plant in their path? This system would only require programming changes from crop to crop without dealing with a bloated knowledge database full of weed image algorithms, whose growth could be affected by weather conditions.